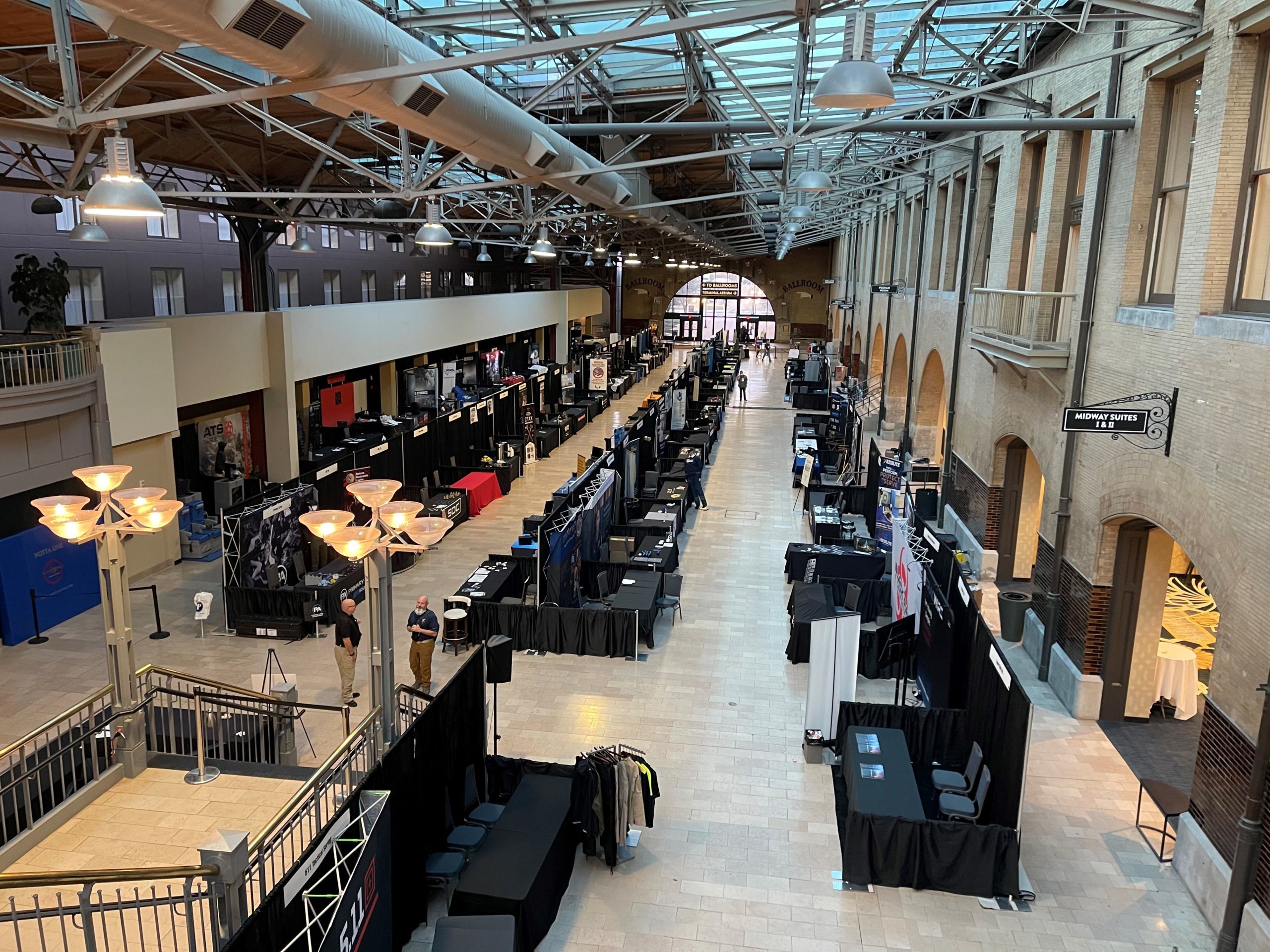 Let’s face it – we are all anxious to finally resume life as we knew it before Covid hit in the beginning of last year. The hospitality industry’s revenue stream saw a sharp decline as everything shut down and people stayed mostly at home. With a global pandemic raging, businesses adapted quickly. Conventions and other big business events were postponed indefinitely, if not canceled outright. Employees stayed home and worked remotely.

Oh, but that was so 2020! Even the most introverted employee realized that working by yourself from home is only tranquil and refreshing for a while and in-person meetings – sometimes still with a hybrid option – have returned to every industry by now.

Hospitality at its Finest

The corporate event business, being dependent on virtually every other industry’s well-being, did not have the easiest route to renewed success. Corporate and association meeting planners are now confronted with having to consider every facet of the pandemic’s impact on business – in addition to the regular aspects of planning a business event, like venue choices, food and beverages, accommodations, and teambuilding activities. Roger Mitchell, Partner at Red Oak Meetings & Events, has one specific suggestion for any planner in 2021, “Be open and communicate with your hotel partners. Don’t be afraid to ask a random, weird question when planning an event during this time. The flexibility of our venues and hotel partners right now is at an all-time high and everyone is working together to bring events back in a safe space.” In March, Mitchell held a successful trade show with 475 attendees at Union Station in Downtown St. Louis. The event took place within the midway and the ballroom space, and any precautions were taken to make participants feel safe when returning to in-person events. In order to adhere to CDC-guidelines, Mitchell recounts, “Certain adjustments were made; for example, food trucks provided the lunches, as opposed to having a buffet set up.” He adds, “Hotels and venues would usually want their food and beverages to stay within their space, but Union Station was extremely flexible in doing what was best for the client, so they were willing to allow the food trucks for people to feel safe.”

Coming Out of the Ashes

Lodging Hospitality Management used the downtime during the early days of the pandemic wisely with a renovation of its Marriott St. Louis Airport hotel. Todd Hotaling, Vice President of Revenue and Marketing, explains, “During this lower demand time, where we haven’t seen quite as much activity as we normally would, we’ve taken the opportunity to do a full renovation on our East Tower rooms.” This was in addition to the West Tower, which had been remodeled just a couple of years before. All of this effort paid off handsomely. “March 2021 was the highest room demand that we’ve seen since before Covid. We are now completely out of the lows and the trench of Covid, and we expect in April and through the summertime to exponentially grow each month in room demand,” posits Hotaling.

He says, “With mass vaccination, people will want to travel again and the biggest hurdle to our industry bouncing back is to get people back to work in hospitality. But it is forecasted that by 2022, we will be back to our prior highs of 2019, which was the highest occupancy the hotel industry has ever seen. The second half of 2021 is already filling up; so much that many who canceled or postponed meetings in 2020 are having trouble finding space and availability for this year.” Hotaling further states, “Hybrid meeting options are the new normal; every meeting includes that option now. Across LHM’s portfolio, a hybrid option is ensured for every meeting in every capacity.”

For every meeting that has a hybrid component, there is a huge increase in attendance. If attendance levels increase for corporations by offering that hybrid option, then meeting venues are encouraged to keep offering it, so it will very likely remain the norm in the future.”

The Navy League of the United States utilized Union Station’s hybrid meeting option for its Special Meeting of Members in January of this year. Mike Stevens, National Executive Director and 13th Master Chief Petty Officer of the Navy, shares a few details of the National Navy League’s meeting, “We wanted to be respectful of people’s health and maintain all the social-distancing requirements and different protocols that are in place. So we offered the hybrid option and made sure that the people who attended in person could meet in a safe manner – with separated chairs, mask requirements, and sanitizing stations. We were very careful and professional about it, and the hotel was very good and accommodating.”

Flexibility and the staff’s willingness to work closely with the Navy League to make sure that all accommodations were met and that the safety protocols were in place is the reason the National Navy League has already planned its annual convention at Union Station.

Stevens says, “The location is wonderful; it’s in the middle of the country. We typically do events on the East Coast or the West Coast; we have done some mid-America events but they’re not as typical. Our national President thought it would be nice to do something in the middle of the country, in an all-American city. So we picked St. Louis and specifically Union Station due to its great history.” He further explains, “It’s such a magnificent venue and the staff is wonderful to work with, so we decided that we would come back there and do our 3-day Navy League National Convention with 130-150 people there in June. The Navy League National President, Bill Stevenson, is very appreciate of the city of St. Louis and the Union Station Hotel for their hospitality in January and is excited to return in June.”

Stevens is personally looking forward to coming back to St. Louis in the summer as the national headquarter is working closely with the St. Louis Navy League Council to make more use of the local attractions, both at Union Station as well as in the city and on the river. While the meals at the convention are provided by the venue caterer or taken at the Union Station restaurant, people do go out in the evenings and enjoy the local restaurants. Stevens sums up, “So it’s business as usual as it can be, in an unusual time.”

For those not wanting to take advantage of the hybrid meeting component, Hotaling suggests, “Several of our properties have great outdoor space, for example, the Sheraton at Westport Plaza with its lakefront. If people feel more comfortable being outdoors, we’ve also seen some great activities at Union Station.” He illustrates an outside event that recently took place at Union Station. Partnered with Anheuser-Busch, a tasting event was held for their new line of seltzer drinks in the refurbished rail cars on the property, which are often used for an opening mixer/welcome reception or as breakout rooms during conventions. Hotaling explains, “Folks were able to come through the different tasting stations in each car. We used timed ticketing, which controlled capacity in each car, so it was safe and not crowded. And then folks ended up underneath the Wheel and could take a ride.”

The Wheel at Union Station is still one of St. Louis’ newest attractions, and the view over the city is spectacular. A ride on the Wheel can be incorporated into any business event in several different ways.

How about giving your clients “a new view of the city” at a product launch for “a new view of your company?” Or asking your employees to take a ride on the Wheel during a brainstorming session – to come up with new views on old ideas? Or simply giving your attendees a ticket to ride the Wheel at the end of a convention, just for fun?

The possibilities for safe, but equally entertaining and productive, meetings at Union Station are endless.

Historic Building in Kansas City, Missouri to be Converted into a Hotel

The Manufacturers Tradeshow & Conference is Happening This Winter

Historic Building in Kansas City, Missouri to be Converted into a Hotel

The Manufacturers Tradeshow & Conference is Happening This Winter

The Charm of Prairiewood – Community, Creativity, and Connection